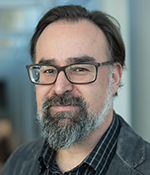 Professor López-Calvo's research focuses, for the most part, on two separate, albeit inter-related, issues: 1) cultural production by and about Latin American authors of Asian descent; and 2) the literary and cultural representations of the relationship between human rights, racialization, gender, migration, and authoritarianism. He has written three books dealing with the first of these topics and three with the second. While in 2008 Imaging the Chinese in Cuban Literature and Culture (U.P. of Florida) entered a virtually new subfield, there is now much more interest in the topic. Besides the three single-authored books on this topic (the other two are The Affinity of the Eye: Writing Nikkei in Peru [U. of Arizona P., 2013) and Dragons in the Land of the Condor: Writing Tusán in Peru [U of Arizona P, 2014]), he has also edited three volumes on Orientalism and East-West cross-cultural relations, as well as an anthology of Spanish-language Jewish and Arab authors. This work has evolved, from the imaging of the Chinese in Cuban cultural production, to the self-representation of both the Chinese and the Japanese in Peru and Brazil. Within the context of cultural nationalism, identity politics, and the politics of cultural belonging, he studies representative works showing an immigrant or Mestiza/o consciousness in the context of what they mean to the construction of national projects in Latin America.

Regarding his second area of research, all three books (“God and Trujillo”: Literary and Cultural Representations of the Dominican Dictator [U.P. of Florida], Religión y militarismo en la obra de Marcos Aguinis 1963-2000 [Mellen P.], and Written in Exile: Chilean Fiction from 1973-Present [Routledge]) trace a coherent analysis of the impact of dictatorship and exile on the region's literature. They also explore concomitant feelings of fascination with and rejection of the exercise of absolute power. These studies emphasize how works deconstruct power, provide a self-referential study of writing itself, or acknowledge the impossibility of describing such tragic events.

Beyond these two lines of study, his book Latino Los Angeles in Film and Fiction: The Cultural Production of Social Anxiety (U of Arizona P, 2011) examines the relationship between identity and the distribution and representation of urban space. He argues that by writing the city and its Latina/o community, Latina/o intellectuals provide their own representational space and negotiate their interpretation of social space dynamics. In addition, he has edited the volumes Magical Realism (Critical Insights), Salem Press (2014) and Roberto Bolaño, a Less Distant Star: Critical Essays (Palgrave, 2015). He is also the co-founder and co-executive director of the open-access academic journal Transmodernity: Journal of Peripheral Cultural Production of the Luso-Hispanic World, and editorial board member of several academic journals.