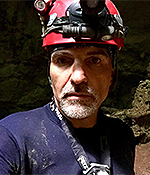 Bio:
Scott Nicolay is an archaeologist working with Dr. Holley Moyes, and like her, he examines the ritual use of caves in prehistory. Scott's research interrogates the archaeological record of ceremonial caves from the prehistoric U.S. Southwest and Northwest Mexico in order to interpret major social, political and religious reorganizations that repeatedly swept the region prior to European contact, and how these shifts mesh both with prehistoric climactic change and contemporaneous events in the Mesoamerica core and periphery. Earlier phases of his work suggest that some of the most important cave shrines in the Southwest served as the foci of ceremonial “catchment basins,” accumulating offerings from large geographical areas, sometimes over periods of centuries, even millennia. Museums collections from these caves have received little attention since their original accession. Through a range of appropriate dating and sourcing techniques, he seeks to frame the provenience of these materials both spatially and chronologically against the larger backdrop of the region’s prehistory. He has worked on multiple archaeological projects both in caves and on the surface in New Mexico, Arizona, Utah, Colorado, Belize and Rapa Nui (Easter Island). Scott is also currently working with several other UC Merced graduate students on a project called Baskets 2 Bytes, conducting 3D digital photogrammetry of Indigenous California baskets in museum collections in order to make them available to weavers as digital objects.